Derek Brouillette is in his second season coaching for the Warriors and is coaching the Quarterbacks.

In his first season at Sterling College he helped the Warriors to a 6 - 6 record. They earned a post season appearance in the NCCAA Victory Bowl. At running back Daniel Doriscar earned All Conference Honorable Mention in the KCAC.

Derek came to Sterling College from Huntsville, AL where he lived for twenty-two years. During his time in Huntsville, he was fortunate enough to coach at multiple high schools.

Derek coached in the Gridiron Developmental Football League (GDFL) with the Huntsville Rockets. He served as Offensive Coordinator with his time at the Rockets and helped them win the Division Championship in 2019.

Derek graduated from Colorado Technical University with a Bachelor of Science in Business Administration concentration in Project Management. He is currently enrolled and taking his Master's in Sports Ministry here at Sterling College.

Derek is married to Dr. Emily Ross and has a daughter, Lexie Brouillette. 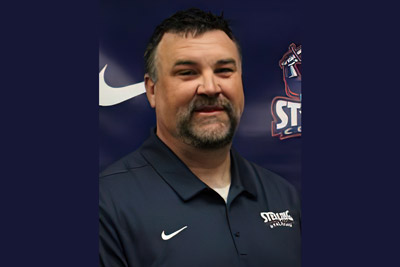