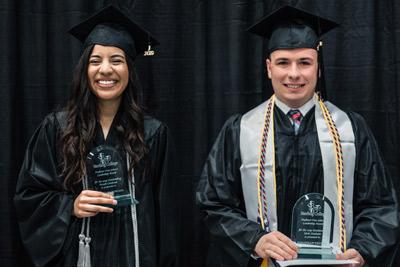 With years of hard work and service behind them, Sterling College seniors Estephany Moncada of Patterson, California, and Jonathan Yelton of Osawatomie, Kansas, were named the 2019 Outstanding Female and Male Graduates in conjunction with the Fran Jabara Leadership Award.

The awards are given to two students who exemplify outstanding academic achievement, leadership skills and involvement, and who portray an enthusiastically Christian faith. They must have a cumulative GPA of 3.4 or higher and are voted upon by faculty and staff.

“Estephany is a rare light in a dark world,” said Emilie Heinl, resident director. “She is always the first to say hello, share a piece of encouragement, and direct you to look towards Jesus. She loves people fiercely and graciously, just as Christ loves us. She is a prime example of servant leadership and the values of Sterling College.”

“I have always been impressed with his courage and commitment,” said Dr. Mark Tremaine, assistant professor of criminal justice. “He treasures his faith, knows what he believes, and has the courage to stand up for his faith even in the face of resistance. During his junior year, he found out that his Kansas National Guard unit was to be deployed to Afghanistan. He likely could have avoided the deployment and finished his senior year, but instead, he chose to honor his commitment and he took a year away from his education to serve his country.  I am honored to have had him as a student and am pleased to call him a friend.”

Sterling College is a Christ-centered, four-year college located in Sterling, Kansas, with a mission to develop creative and thoughtful leaders who understand a maturing Christian faith. For more information, visit www.sterling.edu