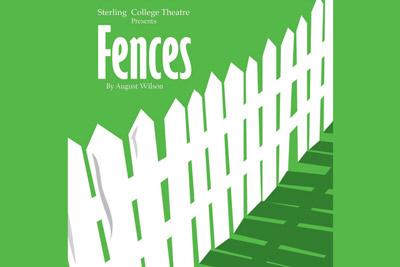 A rare chance to see a production of a legendary playwright’s arguably greatest work will be in store for central Kansas audiences attending Sterling College Theatre’s production of August Wilson’s “Fences.” The often-studied, rarely-seen classic will be presented on Friday and Saturday, March 6 and 7, at 7:30 p.m. and at 2 p.m. on Sunday, March 8, in Culbertson Auditorium on the Sterling College campus.

“There is no question that August Wilson has a rightful place beside Arthur Miller, Tennessee Williams, and Eugene O’Neill. August Wilson’s “Fences” is a play that is grounded in gritty realism, while sailing into lyrical inspiration at the same time. The play leaves audiences both uplifted and devastated – it is truly brilliant writing,” said Sterling College Theatre Artistic Director Sasha Hildebrand.

“Fences” is one of 10 plays by August Wilson in his series on race relations and the African-American experience in the twentieth century. Each of the plays in the series, known as the “Pittsburgh Cycle,” is set in a different decade. “Fences,” winner of both the Pulitzer Prize for Drama and Broadway’s Tony Award, is set in the 1950s. It tells the story of Troy Maxson, a star of Negro League Baseball, who believes he was kept from a career in Major League Baseball by racial discrimination. He works as a trash collector in Pittsburgh.

The original 1987 Broadway production of the show starred James Earl Jones. It was notably revived on Broadway in 2010 and featured Denzel Washington and Viola Davis. Washington went on to direct the popular film version of the story in 2016.

At the core, “Fences” is a play about family. Set in Pittsburgh in the 1950s, this play tells the story of a former Negro League baseball star that now supports his family by working as a trash collector. This modern classic from legendary playwright August Wilson sits at the crossroads of cultural change in America, set during the late 1950s and the beginning of the Civil Rights Movement.

Leading the Sterling cast will be Darren Porche of New Orleans, as Troy. His son, Cory, will be played by Torey Wilson of Rural Hall, NC, and his wife Rose, will be played by Kalasia Thomas of Wichita. Sharing the role of Bono, Troy’s best friend and fellow trash man will be Melvin Irby of Costa Mesa, Calif., and James Nelson of Stockton, Calif. Others in the cast include Arnell Henry from Fountain, Colo.,; Bryson White of Ft Worth; and Bryanna Moncada of Newman, Calif.

Tickets for the Sterling College Theatre production of August Wilson’s “Fences”are $10 for adults and $5 for students. Tickets will be available at the door before each performance.