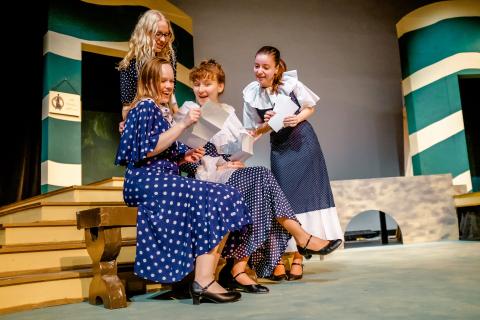 A cast of 21 will be featured in Sterling College Theatre production of the Shakespearean comedy Love’s Labour’s Lost Thursday, Friday and Saturday, February 13, 14 and 15 at 7:30 p.m. and 2 p.m. on Sunday, February 16.

Sterling Director Sasha Hildebrand is basing her version of Shakespeare’s comedy Love’s Labour’s Lost on noted British actor and director Kenneth Branagh’s 2000 movie version. Branagh set the story of four young men who have sworn off women and four young women who make them change their minds, in the 1930s. He also replaced two-thirds of Shakespeare’s words with the songs of George Gershwin, Cole Porter and Irving Berlin. Branagh’s film version and the Sterling College Theatre version essentially make a golden age Hollywood musical of one of Shakespeare’s lesser-known comedies.

After vowing to avoid women, the King and three of his friends have to host a princess and her three ladies. The four men fall in love and decide to court the women. In the end, the women must return to their kingdom for a year after which they will marry the king and his friends, providing they remain true to them.

Tickets for the show will be $10 for adults and $5 for students and will be available at the door before each performance.

Sterling College is a Christ-centered, four-year college located in Sterling, Kansas, with a mission to develop creative and thoughtful leaders who understand a maturing Christian faith. For more information, visit  www.sterling.edu.