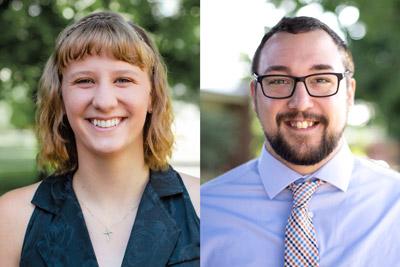 Junior Taya Wilson, of Sterling, came away as an individual winner. Also, the Sterling College Observer newspaper, which is in its second year as the campus newspaper, once again received a Silver designation in the overall category, in which publications can earn one or none of three overall honors within their classification.

Silver is the second-highest designation, and Sterling faced off against other four-year, private college publications that were judged based on three issues produced during the academic year.

“I’m pretty pleased with how things turned out,” said adviser Todd Vogts, assistant professor of media at Sterling College. “Getting a Silver for the second year in a row is great, and it still gives us room to improve. More importantly, though, Taya crushed it.”

Wilson, who is the editor-in-chief of the Observer, earned nine awards and was the only Sterling College journalist to win an individual contest.

“To receive nine individual awards was a huge honor, and I believe a reflection of the hard work that I’ve put in these past two semesters,” she said. “However, I would have liked some of the other staff members to receive awards and be recognized for their work.”

Competing against other four-year, private schools, Wilson swept first through third of the sports/action photography category.

She took first place in spot news and event writing for her coverage of the theatrical production “Carousel” getting postponed due to COVID-19, and her photo that accompanied the story took third in news/event photography.

“I was particularly proud of my first-place finish in spot news and event writing category with my ‘The Covid Waltz’ piece,” she said. “The majority of my awards this year and in years past have been for photography, so I feel like this award shows that I am continuing to improve in my writing and continuing to get better. It was also one of my favorite event pieces this year, so that was also a plus.”

Wilson also received first place and two honorable mentions for her front-page designs, making her the top designer of four-year, private schools, and she checked in with an honorable mention in sports news/game writing for her coverage of men’s soccer.

“I was actually really surprised that I won front page design, simply because this is my first year doing the layout for The Observer,” she said. “I was also surprised that I swept the sports/action photography category because I feel like that’s a pretty competitive category.”

“She’s amazing,” he said. “She can literally do it all, and we are lucky to have her not only on staff but as the leader of the publication. I’m so proud of her.”

The awards were announced during the KCM Virtual Spring Conference April 9.

Students placing in the contest will receive certificates touting their success, but Vogts said the judging feedback all the students will get is even more important.

“There are usually a lot of great suggestions in those comments,” he said. “In some cases, they reiterate things I’ve been saying, which is great because sometimes students need to hear it from someone else for it to sink in. In other instances, the judges said things we hadn’t considered, and that will allow us to really grow. I love the competition aspect of contests, and winning is great. However, learning and improving from it is the most important aspect.”

“I hope that the results from this year motivate the staff for next year,” she said.

“Personally, I want to see more SC students being recognized for their work in the Observer, and I think this year just showed how much more we as a whole can improve. Like my mom would always say when she was teaching me to write stories, ‘you might be good, but you can always be better.’”

Wilson said she hopes she and her fellow journalists come back even stronger next year.

“I think the Observer can only get better from here. The Observer is only in its second year of existence, so it’s going to take time for it to get some traction,” she said. “This being my first year as editor was an eye-opening experience. I’ve seen a lot of areas that we all can improve, such as writing and headlines, but I’ve also seen a lot of writers continue to improve throughout the year, which is always exciting. I believe that as the Observer continues to grow it will continue to see more success in the years to come.”

Both Wilson and Vogts said they were thankful for the paper and the reception it has had on campus.

“I’m extremely grateful for all the support the Observer has gotten from students and faculty,” Wilson said. “It’s nice to see that print journalism hasn’t completely died out, and I hope that more students will be encouraged to join the staff in the coming years.”