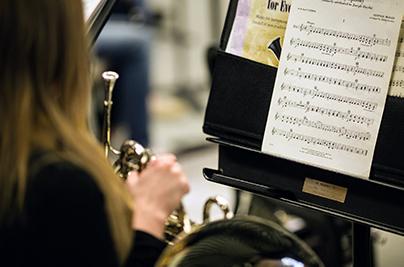 Who says jazz music and classical music don’t mix? Not the Sterling College Music Department. The instrumental music program will be presenting an unusual concert this Sunday, April 18 at 3 p.m. in Upper Wilson Hall that will include both jazz and classical styles of music and will feature both the Jazz Band and the Flute Trio.

“This is a pretty unusual combination for a concert: jazz and classical music. However, we want to show the diversity of the instrumental music department, not only in the music that is performed, but also in the talents and abilities of the students. Two of the classical flute trio also play other instruments in the jazz band,” said Larry Brownlee, director.

The Sterling College Jazz Band will perform five selections. Three are swing charts with solos by Stansbury and Pieplow on saxophone, Brownlee on trombone, and Harding on trumpet. The Jazz group will also perform two ballads that will feature Sterling College adjunct vocal music instructor, Heather Redondo. Those two selections will be the Beatles classic, "Yesterday" and "Love is Blue," first recorded in 1968 by Paul Mauriat.

Contrasting that will be the Sterling College Flute Trio. They will be performing music by Vivaldi, Beethoven and London composer, James Hook. The trios are very challenging literature from the eighteenth century. However, the flute portion of the concert won't be all serious literature. They will also be performing "Turkey in the Raw," a fun and light-hearted theme and variation.

There is no cost to attend the Sunday afternoon concert, which will also be live streamed online. Please email arts@sterling.edu for a link. There is no charge for the online performance either.