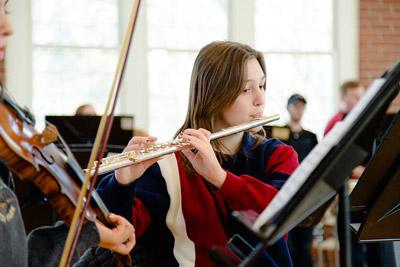 It’s time for the “Confusical Popcert” – a unique mix of “musical-pops-concert” with a bit of “confusing” mixed in. The Sterling College Symphonic Band under the direction of Larry Brownlee will be presenting Confusical Popcert #23 this Sunday, May 1 at 3 p.m.  in Culbertson Auditorium. This year’s performance comes with the title and promise “It’s Gonna Be Epic!”

The band will be playing pieces that can be considered big or epic in one way or another.  The concert will open with one of the most epic works ever written, “Carmina Burana.”  The work was written by Carl Orff and was originally written for Orchestra and three choirs.

“Carmina Burana” has been one of the most used pieces of music in any medium and it’s still used to this day as an inspirational and very dramatic piece that is able to convey something epic within film, TV shows, commercials and has become a staple in popular culture.

It is a 24-movement work.  Brownlee has adapted it for concert band and choir and will be performing six of the movements.  The band will be joined by members of the Wichita Choral Society, Sterling High School Choir, and Sterling Community Choir – about 100 voices.

The “Carmina Burana” performance will truly be a one-of-a-kind performance mixing symphonic band with a choir. Brownlee said, “I’ve loved ‘Carmina Burana’ since I first heard a recording of it when I was a student at Sterling College.  It is such a huge and impressive work.  I searched and didn’t find an arrangement for band and choir, so I don’t know if that has ever been done that way.  It is normally performed with choir and orchestra.  The band arrangement is not meant to be done with choir.  So, I took the band arrangement, cut out the parts that cover the vocal lines and added the choir.”

Other concert highlights will include Stravinsky’s “The Rite of Spring,” “The Great Wall,” and “Everest: The Forbidden Journey” during which slides of Brownlee’s trip to Mt. Everest will be shown.

The Sterling College Jazz Band will also perform in the concert. Their selections will feature guest artist Nick Schroeder of Wichita on trumpet.  He will be soloing on Maynard Ferguson’s arrangement of “Gonna Fly Now,” from the movie “Rocky” and will also be joining the Jazz Band on John Williams’ “Swing, Swing, Swing.”

“This year’s Popcert is easily the most challenging concert, musically, that we have done in the four years that I have been here,” Brownlee said. “With all of the elements involved, and the amount of challenging music performed, it is probably one of the most ambitious musical concerts we have ever had at Sterling College.”

Year-end band awards will also be presented at the performance. Recognition for this year’s graduating seniors as well as awards for outstanding jazz musician and outstanding concert band musician and servant leader will be included.

“I am going to greatly miss this year’s senior class.  They came to Sterling College at the same time that I did, and we have grown together over the past four years.  They have been a great core of students to build our program around,” Brownlee said.

There is no admission charge for the 23rd Confusical Popcert which will also be livestreamed at www.sterling.edu/arts at the same time – 3 p.m. this Sunday.