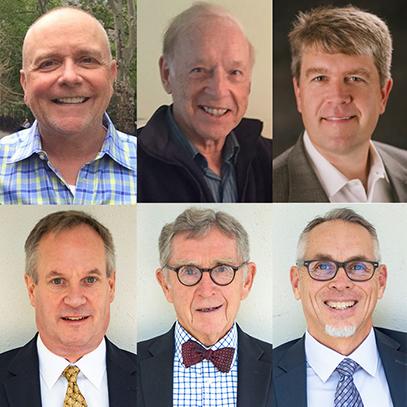 Sterling College recognized the inaugural class of its Marketplace Excellence Awards Winners during its 2019 Homecoming Weekend.

The Excellence in Business Award recognizes a Sterling graduate who has distinguished themselves in the business field while also integrating Christian values and servant leadership principles and ethics in the marketplace.

Jim Brackensick is the president of James W. Crawford Company, a global purchasing company. Before joining JWC as president, Jim served as senior vice president, purchasing, at Rosewood Hotels and Resorts for 25 years. There, he helped form global partnerships and alliances with leading vendors and was in charge of furniture, fixtures, equipment, operational goods, kitchen and laundry.  He implemented the Rosewood Code of Excellence – which defined the luxury chain’s award-winning design and aesthetics standards – and oversaw hotel and resort openings and renovations on five continents.

Brackensick graduated from Sterling with a degree in business administration. He went on to the Culinary Institute of America in Hyde Park, New York, and graduated in 1980 with an Applied Occupational Science degree.

The Excellence in Ministry Award recognizes a Sterling graduate who has distinguished themselves through service and leadership in the church, missions or a ministry-related organization.

Jim Conway is president of Midlife Dimensions, a counseling ministry, and he writes, leads seminars and counsels people worldwide. He is the author/co-author of 14 books and over 150 articles on marriage and family issues, specializing in midlife crisis. Conway was formerly the co-speaker on “Midlife Dimensions,” a national daily radio program heard on over 200 stations; plus, he has appeared on hundreds of other radio and TV programs. He has pastored churches for over 25 years and was the director of the Doctor of Ministry program and associate professor of practical theology at Talbot School of Theology, Biola University.

The Entrepreneurial Excellence Award recognizes a servant leader entrepreneur who has proven success in business – for profit or not-for-profit – and demonstrates a commitment to ethical leadership in the marketplace.

Lance Woodbury is the co-founder of Ag Progress LLC, providing tailored, high-impact services to family farming and ranching businesses. Woodbury has close ties to agriculture and rural communities; he facilitates several peer groups of business owners across the U.S. and teaches family business at The Executive Program for Agriculture Producers at Texas A&M University.

Woodbury graduated from Sterling with a degree in history and government. He earned his master’s in conflict analysis and resolution from George Mason University and his MBA from Purdue University.

The STEM Distinction Award recognizes a Sterling graduate who works in the Science, Technology, Engineering or Mathematics field that has achieved significant success in their professional role and encourages a Christian worldview while discovering innovations and best practices in their field.

Greg Stone is director of microbiology at Pfizer, one of the largest pharmaceutical companies in the world, where he is leading the microbiology efforts for the antibiotic ceftazidime-avibactam on regulatory submissions around the world, medical affairs and current clinical trials in pediatric patients. Prior to joining Pfizer in 2017, Greg was the director of microbiology at AstraZeneca Pharmaceuticals for six years where he led the microbiology efforts for ceftazidime-avibactam in the adult Phase 3 clinical trials and worldwide development program for regulatory approval.

Stone graduated from Sterling with a degree in biology. He went on to earn his master’s degree in molecular and cellular biology from Emporia State University. From there, he went to Kansas State University College of Veterinary Medicine and obtained his doctoral degree in veterinary pathology.

The Excellence in Scholarship Award recognizes a Sterling graduate who has excelled in scholarship, in or outside the academy, and encourages learning and study from a biblical worldview.

Dr. Stuart Robertson is a former pastor, author and continuing lecturer of Hebrew and religious studies at Purdue University. He was born and grew up in India, where his father taught Greek and other subjects in a theological seminary. As a long-time member of the faculty at Purdue, Robertson has distinguished himself in his writing, speaking and scholarly work about the Jewish historian Flavius Josephus, along with being a leading specialist on the topics of Hebrew Bible, Hellenistic Judaism, the Septuagint and Second Temple Judaism.

Manning graduated from Sterling with a degree in business administration. He earned his master of science in physical education from Arkansas State University and then earned his master of arts in advanced leadership studies from Indiana Wesleyan University. He received his doctorate of education with an emphasis in organizational leadership from Indiana Wesleyan University