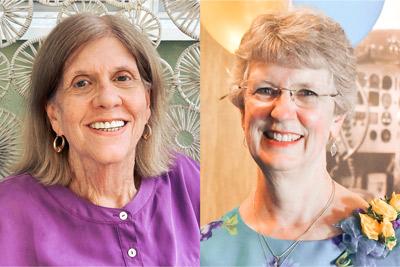 Marty (Montgomery) Behrendt graduated from Sterling with a degree in Physical Education. She began teaching at Folwell Jr. High in Minneapolis, Minn. after graduation. After a couple of moves, Behrendt moved to Los Angeles where she has lived ever since.

She spent several years as a stay-at-home mom to her children, Todd and Gretchen. She then attended UCLA’s paralegal program and received a certificate in paralegal studies, and in 1984, she incorporated her agency Paralegals for Business & Law, a business she successfully owned and led for many years. She now works part-time for a company that organizes corporate moves.

Behrendt has served Sterling College as a member of the Board of Trustees from 1993 to 2005 and was part of the rebuilding of Cooper Hall. During her time on the Board, she chaired the Development Committee and was influential in the profile and growth of the Trustees. She has attended Brentwood Presbyterian Church since 1983 and has served as an elder, taught the senior high Sunday School class, been a member of the youth committee, and is now serving on the worship and arts planning committee.

The Distinguished Service Award is the highest alumni honor presented. It honors and recognizes a lifetime of service that exemplifies the purposes for which Sterling College exists—exceptional contributions to society, distinguished professional accomplishment and outstanding leadership and character. The recipient or recipients are chosen by vote of the Alumni Council and Sterling College’s Board of Trustees.

Jane (Milligan) Davidson graduated from Sterling with a degree in Elementary Education. She met her husband, Ken Davidson ’70, and they were married in 1971.

She taught middle school in Hutchinson for five years, being named a finalist for Outstanding Young Educator Award in Hutchinson in her fifth year of teaching. After five years of teaching, she became a stay-at-home mom for their daughter, Tricia. She then took on many additional responsibilities including: co-Sunday School superintendent and Christian Education Chair, co-Girl Scout leader, board member of Mother-to-Mother Ministry, chair of the planning committee for Vacation Bible School, and taught Investigate Space day camps. She has also served on the Sterling College Alumni Council for several years.

She currently teaches the elementary Sunday School class and chairs the Board of Benevolences, Missions and Memorials at their church. Her interests and hobbies over the years have included wheat-weaving, knitting, attending Bible studies, “coffees” with fellow retirees, a regular exercise program, and has recently joined a monthly book club.

The Spirit of Sterling Alumni Award recognizes a Sterling graduate who exemplifies the heart of Sterling College’s mission. This designation honors a servant leader of distinction who embraces Sterling’s mission and serves Christ Jesus in their career, church, community and human relationships.

Luke T. Orr ’07 graduated from Sterling with a degree in Business Administration. He was active in his time at Sterling, playing on the baseball team as well as participating in missions trips. Orr also served as an admissions counselor for Sterling after graduating. Then for roughly 10 years, he served as a history teacher at Urban Promise in Wilmington, Del. – a nonprofit that ministers to children, young adults and their families.

Joel M. Orr ’09 graduated from Sterling with a degree in Business Administration. Like his brother, he was active in his time at Sterling, serving as a resident assistant, playing on the baseball team, as well as participating in missions trips. He started working at Urban Promise as an intern and began working there full time after graduating. He currently serves as a principal at UrbanPromise Academy High School.

The Young Alumni Award is presented to a recent graduate of the past fifteen years who has achieved success as a younger leader and demonstrated excellence in career, service to others, and loyalty to Sterling College.