Sterling College student to be featured in film festival 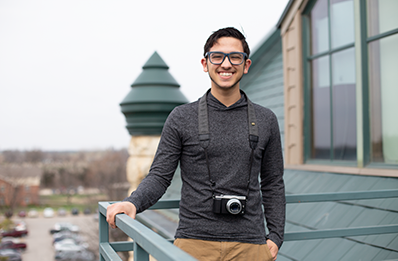 Tuesday, April 2, 2019
Sterling College senior Micah Watney of Sterling, Kansas, has been accepted into the 2019 BisonBison Film Festival on April 5-6 in Ponca City, Okla. Watney’s film, “Not Alone in This” will be shown along with works by students from 14 colleges and six states.
“We are enormously proud of Micah and his contributions to the department. Micah has entered and showcased films at this festival now for three years in a row and has grown very much as a filmmaker. He is persistent, creative, and does not take ‘can’t’ for an answer. He demonstrates much of what we hope our film and media students to become in their short time with us at Sterling College,” said Ryan Corwin, assistant professor of communication.
Watney wrote the script during a scriptwriting class at Sterling and shot, edited and produced the film in his producing and directing class.
“I am incredibly honored to have my film selected at this festival that has a history of pushing students to create their best work. I am also excited to learn from experts in the field during the workshops portion of the festival,” said Watney.
The 2019 BisonBison Film Festival: A Student Competition will announce three Awards of Excellence that will be decided and given out at the end of the Festival. All the selected films will be shown both of the evenings starting at 7 p.m. The Festival Board has partnered with Ponca City Development Authority as the inaugural event for the new City Central facility, located at 400 E. Central in downtown Ponca City. The films will be shown in the new auditorium of City Central.
All Access Passes are available from the “Buy Tickets” section of BisonBisonFilmFestival.org and are $15 for both evenings. Passes for either Friday or Saturday evening are $10 each. Any college student with a valid Student ID is eligible for one free All Access Pass. The BisonBison Film Festival: A Student Competition (BBFF) is a 501(c)3 non-profit with the mission to recognize and showcase the work of student filmmakers enrolled in accredited academic programs in the Mid-America region - Nebraska, Kansas, Missouri, Arkansas, Oklahoma and Texas. For more information go to BisonBisonFilmFestival.org or email BisonBisonFilmFestival@gmail.com.
Sterling College is a Christ-centered, four-year college located in Sterling, Kansas, with a mission to develop creative and thoughtful leaders who understand a maturing Christian faith. For more information, visitwww.sterling.edu.