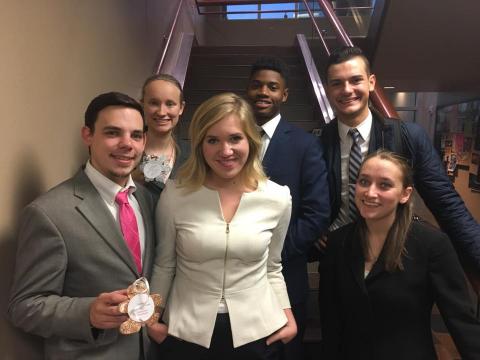 The annual trip to Lawton, Oklahoma, was fruitful for the Sterling College Debate and Forensics Teams, bringing home eight awards from the Cameron Christmas Classic. The three-day tournament, co-hosted by Cameron University and West Texas A&M University included several competitions for both debate and forensics.

Wes Lowrey of Topeka, Kansas, earned the highest award of the group with first place in impromptu speaking.

Bethany Jenkins of Burns, Kansas, competed in IPDA debate. From a field of over 40 competitors, she battled her way to fifth place overall.

Coach Ken Troyer said, “This is one of the more important tournaments of the semester, with it being right near the end of the term most schools are really competitive right now, in that the students are in peak performance shape having had the semester to hone their skills. With each of the team members advancing to finals, we should continue to fare well next semester.”