Jason Briar ’99 serves as the vice president for Student Life. In this role, he directs all Student Life programming and coordination of personal services and programs related to the College’s student development efforts.  He will set the strategic direction for Student Life programs and will make recommendations on related policies.
Prior to coming to Sterling College, Jason has been in public education both as a teacher and administrator for the past 18 years, most recently served as Fairfield (Langdon, Ks) Middle & High School Principal.
Jason is a 1999 graduate of Sterling College, where as a student he played basketball.  After earning his Bachelor of Science in K-12 Physical Education, he went on to earn a Master’s from Emporia State in 2005 and then earned his K-12 Administration Licensure in School Leadership from Fort Hays University in 2008.  From 2000-2006, Jason also served as an assistant basketball coach for the Sterling College Men’s Basketball program.  He was part of two NAIA National Tournament appearances and a KCAC Tournament Championship.
Sterling College is also where Jason met his wife, Darci (Kruse) Brair ’97. Darci is the daughter of Carol Kruse and the late legendary Sterling College Women’s Basketball Coach, Lonnie Kruse.  Darci has been a fourth grade teacher at Sterling Grade School for the past 20 years. They celebrate 20 years of marriage this summer.  They also have 3 children; Lucas, Kali, and Isaac. 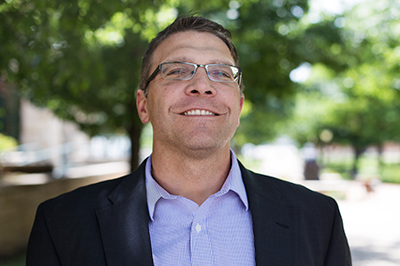