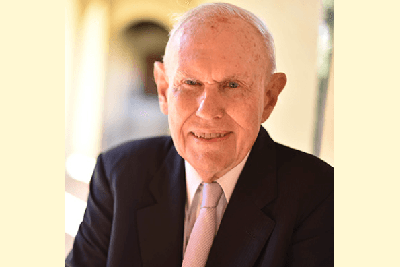 Sterling’s tenth president, Dr. Bruce Douglas, has passed away. Dr. Douglas served as president at Sterling from 2005 to 2008. He passed away on Jan. 12.

“We are saddened to hear of Dr. Douglas’ passing. He was accomplished in so many areas of business, leadership and his work in non-profits. We are forever grateful that he blessed Sterling College by serving as President. His lasting legacy here at Sterling will be felt for generations,” said Dr. Scott Rich, president.

Dr. Douglas was instrumental in the building of the Douglas Residences on campus and they were officially named in honor of Dr. Bruce Douglas, and his wife, Dee. In his time the College saw overall enrollment growth, the establishing of its online programs, increasing the student services programs and the creation of the Career Services Office.

Dr. Douglas began his entrepreneurial career in 1975 as founder of The Douglas Company, a construction and engineering firm. Years later, he successfully transformed Sterling College during his tenure as its tenth president. He has gone on to serve on the boards of many prestigious educational and cultural organizations and founded the New Ohio Institute, a non-profit policy center focused on finding and carrying out solutions to urban problems. He was also the founder and current CEO of Harvard Development Company, a leading real estate development organization specializing in urban revitalization and rejuvenation. He resided in Winter Park, Florida. He is survived by his wife, Dee; by his son Peter (Deanne); daughters, Susan Struna (Steve) and Anne Lewis; grandchildren, Bruce Douglas (Lauren), Megan Tarkey (Patrick), Jennifer Douglas, Sam Struna (Josie), Molly Struna, Kate Lewis and Benjamin Lewis; and great-grandchildren, Peter and Johnathan Douglas, and Eloise Struna. Dr. Douglas was preceded in death by his parents, Benjamin and Kathleen Douglas; his sister, Kathleen Cosgrove Dannemiller; his brother, William Douglas; and his newborn daughter, Mary Douglas.

The funeral was held on Monday at St. Margaret Mary Catholic Church in Winter Park, Florida, with graveside service and luncheon that followed at The Alfond Inn. In lieu of flowers, donations may be made to Sterling College (www.sterling.edu) or the Orlando Museum of Art (www.omart.org).