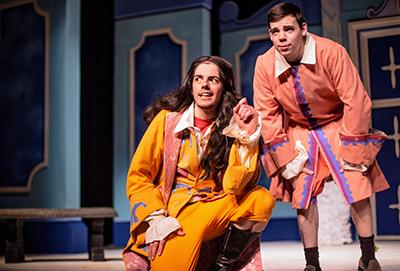 Tuesday, February 26, 2019
Love, lies and laughs. That’s what to expect from the Sterling College Theatre production of The Liar, this Thursday, Friday and Saturday, February 28, March 1 and 2, at 7:30 p.m. in Culbertson Auditorium.
“It’s a great mirror of life. It has a balance of love and conflict and comedy. said Director Sasha Hildebrand ’03, artistic director of Sterling College Theatre.
The Liar unravels a web of mistaken identities and lies with hilarity. The 17th-century comedy follows Dorante, a man incapable of telling the truth, falling for Clarice, but believing her name to be Lucrece. Dorante tells fabrication after fabrication to manipulate the other characters and get the girl – or who he believes to be the girl.
These are themes that, as it turns out, aren’t confined to the 1600s.
“The fact that it’s a 17th-century comedy actually means very little. It is a play called The Liar, and it’s about lying, which of course is painfully prevalent in our society right at this moment. We still have the same desires, the same dislikes. It’s just that in the 17th century they lived under different rules and regulations. But they were just like us,” said Hildebrand.
The universality of the conflict in The Liar was just as important to the actors as they fleshed out their characters.
“I want the audience to be confident and believe that they can relate to the characters on stage, even if they’re wearing big hooped dresses or have swords on their hips. I think that’s one of the biggest gems in theater: that someone who was born in 1999 can do a play from the 1600s, because it’s universal,” said Hildebrand.
The original play was written by Pierre Corneille but the version Sterling College is presenting has been adapted by contemporary playwright David Ives to include anachronisms from the present day, such as references to cell phones. The humor, however, is perhaps the most universal theme in The Liar.
“The original version of this play is an ancestor of the great Italian Commedia del Arte'- a very physical, playful style of theatre that we've gotten many of our stock characters from; such as the villain, the young lovers, and the pompous fool. This adaptation holds strong to that tradition – and it's a style that many audiences have come to enjoy,” explained Hildebrand.
“I was surprised at how many jokes there are. I’m especially impressed with the playwright’s ability to pull a joke out of nowhere, ” said Will Dutton, sophomore.
Through rehearsals, the cast has become comfortable with flexing her comedic muscle.
In classic 17th-century fashion, the characters in The Liar frequently involve the audience in the fun. In this play, until the very end, only the audience knows the truth.
“Every character in the play thinks the audience is on their side and believes what they’re saying,” said Hildebrand.
The play is in verse, which means the actors speak in iambic pentameter.
“The whole play rhymes. The whole thing is a song. You could put a beat to it. I think that’s one thing that audience members need to be aware of, so that they can dive into the story instead of getting caught up with how it sounds,” said Hildebrand.
In a cast of eight, the language is as important as a ninth character. The director has encouraged her theater novices not be intimidated.
“When I first heard that the show is in verse, I automatically connected it to Shakespeare. But it’s completely understandable. If we’re doing our job right, you’ll know exactly what’s going on in the story, ” said John Williams, freshman, who plays the Liar.
Most of all, The Liar is about laughing.
“I want the audience to come and see how much fun we’re having, and let that transfer into their lives. The situations are serious, but you can still have fun and enjoy yourself,” said Hildebrand.
Tickets are $10 for adults and $5 for students at the door before each performance.
Sterling College is a Christ-centered, four-year college located in Sterling, Kansas, with a mission to develop creative and thoughtful leaders who understand a maturing Christian faith. For more information, visit www.sterling.edu.