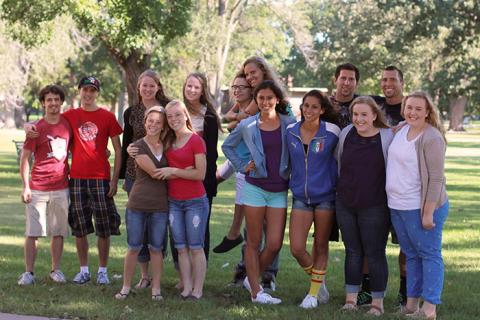 Twins are a rare phenomenon in the world, and according to the Twin Foundation, they account for approximately two percent of the general population. But at Sterling College in Sterling, Kan., twins account for six percent of the new students on campus – tripling the national average.

The incoming students at Sterling College this fall includes seven sets of twins. Added to the two sets of twins already on campus, these 18 birthday-sharing siblings account for 3.4 percent of the on campus enrollment, well over the national average.

Seeing double is not a rare thing at Sterling College.

“Our percent of twins is well over the national average. For a small school like Sterling, nine sets of twins seems like a lot and is definitely a rare occurrence. I’ve been here for about 30 years and we’ve never had this many twins, especially seven in one incoming class,” said Dennis Dutton, director of admissions.

“While we weren’t specifically recruiting twins,” said Dennis Dutton, director of admissions, “the College’s two-for-one twin scholarship makes the school that much more attractive to incoming freshmen and transfer students.”

Sterling College offers 50 percent tuition to each twin if both are fully admitted and enrolled as full-time students.
“We have a great start on a large number of twins for next fall’s class, too,” said Dutton. “Two sets of twins, one from Kansas the other from Texas, have already made their decision to attend Sterling for fall of 2014. We also have another first – the first set of quadruplets who have applied to Sterling for next fall.”

Justin Porter of Bountiful, Utah, heard of Sterling College through his family. His parents, John ’87 and Cristi ’90, are alumni of the College.

“My brother and I came to the Preview Day at Homecoming last year. I was attracted to how friendly the people were here. My twin brother, Austin, and mom loved the Christian atmosphere. We were both thinking about attending Sterling, but the two-for-one tuition policy made it even more financially attractive,” said Porter.

“Austin and I were not looking to attend the same College. It just kind of happened. In fact, we went to different high schools, so it’s kind of funny that we ended up at the same College. At first I wasn’t looking forward to it, but it has turned out to be nice.”

Shelby and Darian Coen of Hutchinson, Kan., were recruited to Sterling College for athletics. Shelby plays softball and Darian plays golf. Shelby was attracted to Sterling because of the Christian atmosphere and how open everyone was about their faith. Coming from a public high school, she was not used to talking about faith alongside subjects like math and English.

“I’ve enjoyed being able to talk to the girls in my dorm about Christianity and my faith. I’m a math major, so integrating faith into math classes is also new and exciting for me. It helps me see how everything works together,” said Shelby.

The twin scholarship was also the deciding factor for Shelby and Darian.

“You can’t turn down 50 percent off of tuition,” said Shelby. “It made college very affordable.”

Justin and Shelby have different perspectives on being a twin on campus.

“I don’t look much like my twin,” said Justin. “In fact, most people don’t even know we are brothers until we tell them that we are.”
Shelby, however, said, “We have people ask us all of the time if we are twins. A lot of times we get called each other’s names. We’re used to it, so it doesn’t really bother us though.”

The other five sets of twins in the incoming class includes Gabrielle and Kristina Baca of Corona, Calif.; Miguel and Miranda Rodney of Junction City, Kan.; Emily and Michaela Stevens of Murrieta, Calif.; Lance and Nathan Terry of Merced, Calif.; and Andrea and Ariel Tippit of Sulpher Springs, Texas.

Sterling College is a Christ-centered, four-year college located in Sterling, Kan., with a mission to develop creative and thoughtful leaders who understand a maturing Christian faith. For more information, visit www.sterling.edu.