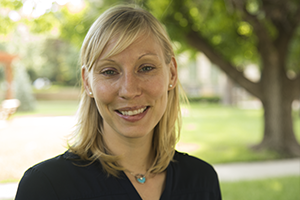 Adding to her list of publications, Sterling College Assistant Professor of Language and Literature Dr. Rachel Griffis has been published in two academic journals during this academic year. Her first article, titled “Self-knowledge and character formation: Teaching to students’ weaknesses” was published in the International Journal of Christianity & Education. Her second article, titled “Reformation Leads to Self-Reliance: The Protestantism of Transcendentalism” appeared in Religion’s publication celebrating the 500th anniversary of the Protestant Reformation.

“Rachel has shown a lot of leadership in continuing the conversation about the philosophy and purpose behind the integration of faith and learning. Her work and research are inspiring others, and we are very happy to have her at Sterling College,” said Ken Brown, vice president for academic affairs.

“I came across ‘The Road to Character’ while listening to TED Talks,” said Griffis. “While reading it, I noticed a strong correlation between Brooks’ argument and the connection between virtue and suffering, specifically as discussed by Dante and St. John of the Cross. A better understanding of these significant ideas in the Christian tradition helped shape how I teach my students and help them address their weaknesses as a way to develop well-rounded, self-aware students.”

“Reformation Leads to Self-Reliance: The Protestantism of Transcendentalism” argues that “American literature plays a significant role in perpetuating Protestantism in American culture.”

Griffis said, “The Protestant Reformation is a time period that has always interested me. The exploration of how American authors were directly affected by Protestantism and the ideals of that movement is something that I think needs to be taught in relation to Ralph Waldo Emerson and the transcendentalists.”