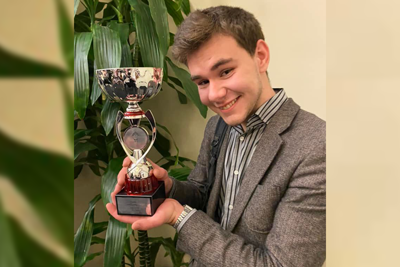 Sterling College has another National Champion on campus. Freshman Cody Brooks became the National Champion of Novice International Parliamentary Debate at the Pi Kappa Delta National Tournament held at the University of Central Florida in Orlando, Fla., on March 10-12. Brooks is from Sterling, Kan.

Tournaments for the last two years have been online due to COVID restrictions. This was the first in-person tournament for the team in two years.

“One of the challenges Cody has faced competing online is audience adaptation. It's tough to read body language, facial expression and even hear tone of voice with ease on a screen; whereas in person, Cody is much better at adapting to his audience and a space,”  said Ken Troyer, forensics coach.

Brooks had only competed in two tournaments – both online – before Nationals.

“When you’re competing in person you have people's full attention; you can see when they’re paying close attention to certain arguments or bouncing their leg out of boredom. Most importantly, however, competing in person allowed me to get to know my opponents and meet some genuinely remarkable people. For that reason, I prefer in-person competition,” said Brooks.

Unlike most collegiate debate/forensics competitors, Brooks had no high school experience in either arena.

“Before attending Sterling, I was looking at different ways to get plugged into the community. Coach Troyer allowed me to watch the preparation process for last year's online National Tournament. This allowed me to peek behind the curtain and watch the process,” said Brooks.

He was also allowed to help the debaters – one of whom was his sister, Ardynn (Brooks) Hershberger ’21.

“After that I met with Coach Troyer for essentially a ‘crash course’ in debate. He explained to me what in the world ‘solvency’ and ‘harms’ were. As someone who grew up homeschooled and had nothing to do with debate until college, it felt like learning another language,” said Brooks.

The national tournament was held at the University of Central Florida in Orlando. There were 69 schools attending with more than 1,000 entries. Unlike other collegiate competitions, all colleges/universities compete with one another regardless of size or conference designation. In elimination rounds, Brooks defeated competitors from the University of the Cumberlands, Marshall University and Butler University.

Troyer reports that Brooks is the fourth national champion in Debate/Forensics in his 16-year tenure as Sterling College coach. He adds that if one counts the novice national tournament results over the years, that number more than doubles. The National Tournament Brooks and his teammates attended was not exclusively for novices.

“I’m proud of the rest of the team, too. They all did pretty amazing work,” said Troyer.

“I could never have won this event or progressed this far without my team’s high quality and sometimes very intense practice rounds. Iron sharpens iron. Without the help of my teammates, I would be a very dull debater,” said Brooks.

“Troyer’s priority is the individual student’s education and wellbeing. I respect that,” said Brooks. “He took me on with absolutely zero experience because I wanted to learn. Most coaches wouldn’t do that.”

Brooks concluded, “This experience has been crazy and educational. In the beginning, it was like getting onto the football team without knowing who or what the quarterback was. Well, now I feel more comfortable. I know how the game works, I can identify the areas I can improve on and I’m excited to learn. This is just the beginning.”