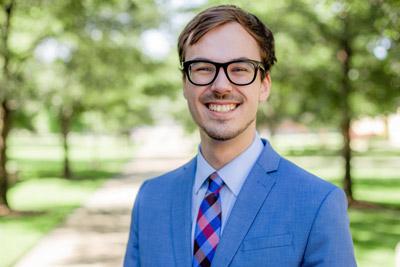 Sterling College has announced Adam Moore of Nickerson, Kan., has been named the State Champion in Persuasive Speaking and, by virtue of that performance, is one of two students from the state of Kansas that is afforded the opportunity to compete at the annual Interstate Oratory competition.

“I was thrilled with Adam's performance at the tournament. Adam is one of the hardest workers on the team this season, and despite being new to the field of persuasive speaking, I was elated that he could qualify,” said Ken Troyer, forensics coach.

This year marks the 145th Interstate Oratory competition, which is the oldest intercollegiate speaking competition in the United States. Adam becomes only the fifth Sterling College student to qualify for the competition and only the second-ever Sterling College State Champion in Persuasive Speaking. In addition to the elite competition, each qualifier will have a copy of their research and speech published in a compilation to include all qualifiers works.