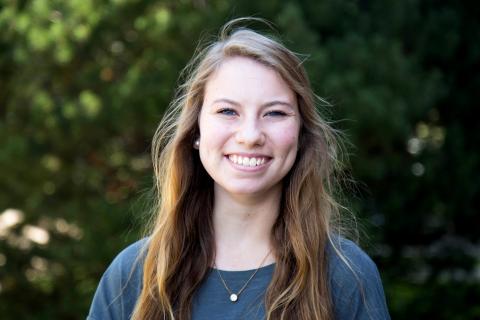 Sterling College junior Shelby Stowe of Bentonville, Arkansas, was one of 12 math majors from across the United States selected for a research experience for undergraduates at Valparaiso University. Under the guidance of Dr. Alex Capaldi, professor at Valparaiso University, Stowe and two other students worked to create a mathematical tool that would analyze the effects of a White Nose Syndrome, a fungal disease affecting the population of bats in North America.

“Field research has found that after WNS hits a colony, in about two years, 75 percent of that colony will have died, and with time, the population will continue towards extinction. We began by assuming the vaccine that is currently being developed could offer lifetime immunity and found that if you could vaccinate about 50 percent of a bat colony, you could save a dramatic number of the bats in that population. However, we understood that creating a vaccine that offers lifetime immunity might not be feasible so we considered various lengths of immunity,” said Stowe.

Stowe worked with Eva Cornwell of St. Olaf College and David Elzinga of Wichita State University. They studied a math model created by another researcher that examines the disease and possible control measures. The students also found an article on a new vaccine in development and were able to combine the two ideas. Building on the previous research, they were able to create a math model showing the effectiveness of controlling White Nose Syndrome with a vaccine.

Due to lifetime immunity from a vaccine being difficult to achieve, Stowe and her colleagues also developed a graphic model predicting vaccine effectiveness based on immunity length and the percentage of a colony vaccinated.

“You could find your two numbers and see how well that [combination] could work. So depending on what immunity is offered, you could figure out how many bats you’d need to vaccinate to make it effective,” said Stowe.

Through the guidance of Dr. Capaldi, their paper “Modeling Vaccination Strategies to Control White-Nose Syndrome in Little Brown Bat Colonies” has been submitted for peer review to “Ecological Modeling.” The group also presented their research at numerous conferences and universities including The Indiana Undergraduate Mathematics Research Conference at Purdue University and The Tenth International Symposium on Biomathematics & Ecology: Education & Research at Illinois State University.

Stowe is currently collaborating with Elzinga on another math model of the Sylvatic Plague’s effect on prairie dog populations.

“The field research is finding that the current vaccine is not really saving prairie dogs,” said Stowe.

Their research “Modeling Control Method Combinations to Manage the Sylvatic Plague in Black-Tailed Prairie Dog Towns” was presented in Topeka at Undergraduate Research Day at the Capitol in February. Their research concludes the immunity length offered by the current vaccine is not long enough to protect the species. Their research suggests vaccinating more often or modifying the vaccine.

Stowe and Elzinga will present both research projects at Wichita State University on Friday, April 6, as part of the Undergraduate Research and Creativity Activity Forum.