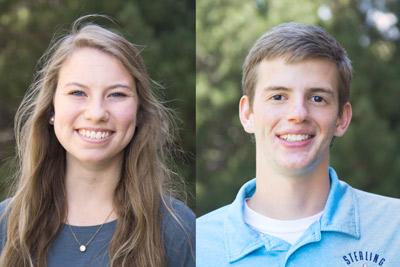 Tuesday, May 7, 2019
Sterling College senior Shelby Stowe of Bentonville, Arkansas, and senior Zachary Williams of St. Louis, Mo., received Meritorious Winners designation from the Mathematical Contest in Modeling. The contest, held by the Consortium for Mathematics and Its Applications, included 14,108 teams this year, competing from 17 different countries. Only 42 teams finished higher than the Sterling student team of Stowe and Williams, who finished in the top 6.8 percent of all competing teams.
“I was incredibly impressed with the creativity and mathematical skills that Zach and Shelby put forth in their solution. It may seem like four days to ‘answer’ a math problem is a lot of time, but because of how non-mathematical the questions sound, it requires a lot of time and ingenuity to figure out how mathematics can begin to address the problem at hand. When they first showed me their submitted paper, I was blown away by the advanced mathematical techniques that they incorporated within the scope of their 17 page solution. They should be very proud of what they have accomplished,” said Pete Kosek, assistant professor of mathematics.
The Mathematical Contest in Modeling is an international math competition where schools form teams consisting of up to three students who spend four days creating a mathematical model to answer an open-ended real world question. Questions asked in competition require students to determine how mathematics they have learned, along with high level mathematical research, can come together to answer a question that they have never seen before. This year, they created a mathematical model to address the question, “What if fiction came to life?” and were required to determine the ecological impact that dragons would have on the earth if they came to life.
In the contest there were 17 Outstanding Winners, 25 Finalist Winners, 916 Meritorious Winners, 2222 Honorable Mentions, 9635 Successful Participants, 75 Unsuccessful Participants, and 1218 Disqualified.
Some of the notable US colleges who had teams that were given designations below us included UCLA, Cornell, The Ohio State University, and the University of Wisconsin. This is the third year Sterling College has competed in this competition. The past two times, Sterling’s team has been given the designation of “Successful Participant.”
Sterling College is a Christ-centered, four-year college located in Sterling, Kansas, with a mission to develop creative and thoughtful leaders who understand a maturing Christian faith. For more information, visit www.sterling.edu.