Sterling College Theatre to perform “The Lion, the Witch and the Wardrobe” 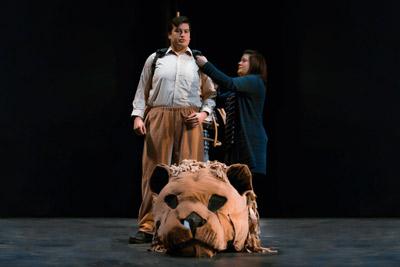 The most famous character in all of C. S. Lewis’ “Narnia” books is Aslan the lion. He is at the center of all the stories including the first book of the series The Lion, the Witch and the Wardrobe, an adaptation of which will take the stage for Sterling College Theatre this weekend on Friday and Saturday, February 4 and 5 at 7:30 p.m. and at 2 p.m. on Sunday, February 6.

The familiar, classic story of good versus evil through the eyes of four children who find themselves in a strange land called “Narnia,” has been retold in movie form, animation, musicals and as plays. The play adaptation by Joseph Robinette is the only version for production in the United States.

Depicting Aslan onstage is a challenge. It has been done with masks, with light, with a person in a lion costume and as a puppet. Sterling senior theatre student Ava Bachert is taking on the challenge of bringing Aslan to life as a puppet. Directing the show is theatre professor Stephen English.

Bachert and English have worked together before. Bachert said, “We both tend to get really creative and unique with our concepts; and we both like incorporating symbolic elements as well as mixing colors and shapes to help the audience get certain impressions or feelings.”

Bachert starts her design – whether costumes or puppets or masks – by delving into the script and looking into other professional productions. She said, “Then I take some of those ideas to my best friend: Pinterest. That leads to a bunch of rabbit holes and usually some unique ideas.”

Bachert wanted Aslan to be bigger than life and fantastical for the children and audience for this show. She said, “I literally walked through every inch of Lowes to find things that were the right shape and weight as well as flexibility for what we needed for Aslan’s body. For the head I found a lion mask cosplay pattern and blew it up 60 percent bigger and used batting and fabric to reshape the mask to look more life-like.”

Bachert estimates she spent 15 hours in researching ideas for the huge puppet costume. Her husband Micah Bachert leads the construction team for the show, not only for the set but for the puppet as well. Together the Bacherts spent another 40 hours in construction. They ended up using wood, PVC (polyvinyl chloride) pipe, fabric and “a whole lot of zip-ties” to make Aslan.

There will be two actors inside the giant Aslan puppet/costume. Senior theatre student Nilo Reynoso provides the voice and operates the head while freshman Max Martin stands inside the posterior of the lion and holds most of the weight. Reynoso said, “While the voice of Aslan has to have power and majesty, I want audiences to hear his gentle, care-giving side of his nature as well.”

In addition to the Aslan puppet/costume, Bachert designed nine animal character masks for the show and costumes for the White Witch, the Penvensie children and the other characters.

Tickets to the Sterling College Theatre production of The Lion, the Witch, and the Wardrobe are $10 for adults and $5 for students and are available online at www.sterling.edu/arts or at the door before each performance. The show runs about 75 minutes and is meant for all ages and is at Culbertson Auditorium on the college campus.