Sterling College Theatre to perform “Catch Me If You Can” 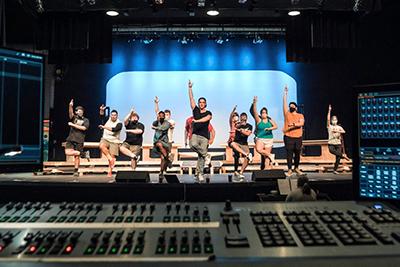 When it comes to musicals, Sterling College Theatre seems to believe in the adage: bigger is better. Even in this pandemic year Sterling’s music and theatre departments have combined to present two big cast musicals. After presenting “Carousel” in January, the directors, students and designers are hard at work for “Catch Me If You Can,” which will be performed Friday and Saturday, April 23 and 24 at 7:30 p.m., and on Sunday, April 25 at 2 p.m.

Based on the popular movie of the same name, “Catch Me If You Can” tells the true story of Frank Abagnale, Jr who traveled the globe posing as an airline pilot, surgeon, and lawyer before being caught by the FBI. The score is by Marc Shaiman and Scott Wittman, the team behind the popular musical “Hairspray.”

“The songs just kind of weave in and out between scenes, so everything moves really quickly,” Marisa Callan, the show’s music director said. She described the music as, “modern, rock and roll, fun, a little bit jazzy, too, kind of crooner style.”

“Because this kind of music is so familiar to our ears,” Callan said, “on first listen, it doesn’t seem like the music is going to be very hard. However, when we started learning things, we realized how much it requires really tight singing and really sticking vocal parts.”

Callan said the music is particularly challenging for the three leading men who play Frank Jr., his father Frank Sr., and the detective Carl Hanratty. The Sterling College students in those roles are Dylan Werth, Nilo Reynoso, and Will Dutton.

“The three lead guys sing a lot, and they sing hard stuff, things that are really extensive vocal ranges,” she said. “They have to train, work up endurance, to be able to sustain a show like that.”

After the three lead men, Callan said, the ensemble has the most challenging part in the show. With choreography, in addition to the difficult music, “they have a lot to learn,” Callan said. She’s confident they can do it.

“We have a good core group in the music and theater department who really enjoy a challenge and kind of thrive on that,” Callan said.

She said that given Sterling’s small size, “It could be easy for us to pick shows where it just requires one or two good leads, because at every school you have one or two superstars.” But the department doesn’t have to rely on one or two talented people to carry the show.

“I think the beauty of this show is that we are so deep as far as our talent goes,” Callan said. “Even the ladies who are in the choral ensemble have to sing really hard things. Plus, they each have a solo line.”

Callan said this is also true of the men in the ensemble, “We have a lot of talented guys right now: guys that are competitive and desire that challenge.”

Big also describes the show’s costume needs. Many of the show’s female ensemble will have five costume changes. The “Catch Me If You Can” set has been a big challenge, too. It is being designed and constructed with the help of Michael Downs, a creative designer from Wichita. Downs has designed concert spaces and lighting designs for performers such as Snoop Dogg, Fifth Harmony and Rihanna. He has also worked for four different Olympics, designing the medals pavilion for the 2010 Vancouver Olympics. “Catch Me If You Can” marks the 994th theater set Downs has designed.

Theater professor Sasha Hildebrand said she told Michael, “Create me a stage that looks kind of like a 1960’s or 70’s variety show TV show set. Give me different levels to play with.”

Hildebrand said Downs did just that, creating a set that will feel like a rock concert or a Vegas show, complete with light up elements.

Since the show is set in the mid-1960’s when color TV’s were first becoming common, and the first song in the show is entitled “Live in Living Color,” the show’s set design includes four large TV shaped platforms, which will be used for dance numbers and other elements of the show.

Callan said “Catch Me If You Can,” was selected as the spring musical because it is a high energy, colorful, bright show, “will be a good show for really anyone who remotely likes music and theater.”

All performances of “Catch Me If You Can” will take place in Culbertson Auditorium on the Sterling College campus. Social distancing and masks for audience members will be required. Tickets are available at the door or online through sterling-college.ticketleap.com. Tickets are $15 for adults and $5 for seniors and students.