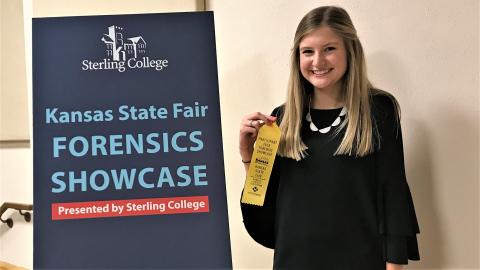 Kansas State Fair patrons were treated to some of the best competitive speakers in the state at the third High School Forensics Showcase, presented by Sterling College. The event was held on Thursday, Sept. 13, in the Hansen Auditorium on the fairgrounds and was hosted and organized by Sterling College Debate and Forensics. Over 550 audience members were in attendance.

“This was our third annual Forensics Showcase at the Kansas State Fair and we were very pleased with the turnout and response. We have a bigger audience and more participants this year. It was particularly encouraging to see some schools return and to have representation from 1A through 5A performing. There is no other opportunity to see examples of outstanding performances across all sizes of schools,” stated Sterling College Forensics and Debate Coach Ken Troyer.

“One junior high class even attended. Sterling College alum Kacie Hastings, who is now teaching at Emporia Middle School brought over 30 students to the event to show her young students what forensics is all about,” said Troyer.

A total of 23 performances were shared during the Showcases’ three sessions. Because the Showcase featured state champions from last spring’s championship tournaments, some of the participants had graduated from high school and are in their freshman year at college.

The event also drew forensics squads from several schools who did not have a participant in the showcase but who wanted to see the quality and examples of award-winning entries. After each performance, the audience had the chance to ask questions of the performers, providing an educational experience for all.