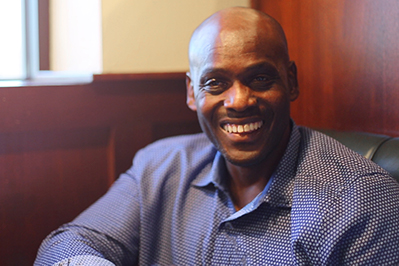 Since his football-playing days as a Sterling College student-athlete, Edgar Smith ’87 has discovered a passion helping people reach their potential and feel great about their fitness. Edgar combined his experience in the fitness industry with his heart for people. Edgar formed Fitness Boot Camp and strives daily to reduce the rate of obesity in Wichita and surrounding areas. Edgar uniquely uses the beauty in nature trails and community parks to conduct these “boot camps” to enjoy the fitness journey.

SM: Tell me about your time at Sterling. What favorite memories do you have from here?

Dr. Dorothy (Wyrill) Behnke ’59. She would have been the most influential person to me at Sterling. I remember as a freshman trying to pull one over on her and turn in some English Comp work that was written by one of my buddies. She pulled me aside, and in my brain all that I heard was, “I know what you’re capable of and I see potential,” and that was it, that’s all it took. From that point on, you never wanted to let her down when you were turning something in. You wanted to make her proud. She was influential to me as well as Dr. Arn Froese.

SM: Tell us about your small business - why did you start it and how did you grow it?

When I was starting out, there were two ladies who I had working with different trainers, but they weren’t having success losing weight. One of them said to me, “You know I feel like I’m just supposed to be fat. I mean, nothing works.” So I said, “Look, I tell you what, I’m going to work with you.”

So, I thought, let’s do something totally different. We had just put a beautiful boxing area in a backroom of the building/our facility. So I said, “Every Sunday, we’re going to get together, put some gloves on you, and we’re going to box.” So, we got back in the boxing ring and they would each take rounds, punching one-on-one for three minutes, not hitting hard, but keeping in motion. And you know what? One month into the routine these ladies lost 12 pounds.

From there we just kept changing it up. We decided to go out into the city parks, running and doing pushups, fun stuff. One evening Anita Cochran (former KSN NBC News anchor) discovered what we were doing and she joined in. Within a week we had a feature on the TV news as well as in the Wichita Eagle newspaper. We went from two ladies boxing in the back room to over 200 people doing classes here in Wichita and surrounding cities. We landed a corporate account with General Electric in Winfield. And that tells you how things work out and how God has a plan for you. He’s going to put it all into play. You just have to take the journey.

SM: What drives the success of the business?

There are a lot of days where I think, “Why do I do this anymore? I don’t have to do it anymore, so why am I going to get out of bed at 4:30 a.m.?” But the key is that I don’t want to let these people down. And so every day I get up, regardless of whether they make it there or not, because they need me to be there and I need them.