Nic Martinez is in his seventh year here at Sterling College, and is now set to begin his first official year as Head Men's Soccer coach in the fall of 2017. Coach Martinez has been a part of the Sterling soccer programs for the past seven years, working as an assistant for both the women's and men's soccer teams. As a former Warrior and standout keeper himself, Martinez has been the goalkeeper coach for both the women's and men's programs during his time at Sterling. Coach Martinez also played professional soccer for the Wichita Wings and the Wichita B-52s in Wichita, Kan. from 2011-2014.

Coach Martinez is from Las Vegas, Nev. and began his collegiate soccer career at Cascade College in Portland, Ore., spending three years with the Thunderbirds. He then finished his senior year at Sterling College, playing for the Warriors in the 2009-10 season. While playing at Sterling, Martinez was 5-7-3 in his one season as the Warrior keeper. Nic made 89 saves and had a .802 save percentage during his senior campaign.

Coach Martinez holds a B.A. of Arts in Business Administration with a concentration in marketing from Sterling College.

Nic resides in Sterling with his wife Lacey and two-month old son, Lincoln. 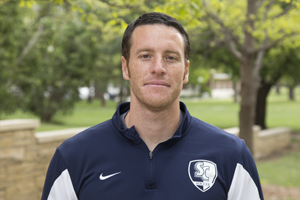